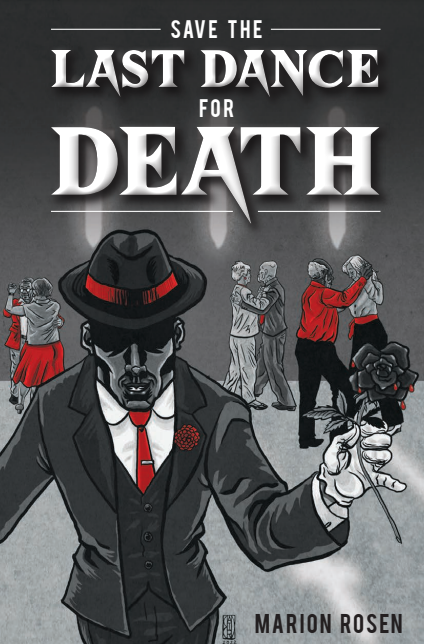 Purchase SAVE THE LAST DANCE FOR DEATH on Amazon

Save the Last Dance for Death by Marion Rosen

I moved into a retirement community after the death of my husband Morris "Morrie" Rosen thinking my writing days were over.  After all, I would now have new friends and plenty of new activities to keep me busy. I'd barely settled in when we were told the pandemic was everywhere, and we suddenly needed to stay in our apartments and distance ourselves from other people. I had to think of something to conquer my boredom, so I returned to the occupation I knew best and started writing SAVE THE LAST DANCE FOR DEATH.

The characters are loosely based on people I know and that helped to make telling the story fun. I'd never had fun killing one person after another before, but this story came together easily. In spite of having to solve countless murders, the characters seemed to be having as much fun as I was.

A Kid from Pittsburgh by Marion Rosen
With Morris Rosen

I first conceived the idea for a biography about my husband’s early years (from age 13 to 20) while touring Europe in 1994 for the 50th anniversary of D-Day. For this journey, World War II veterans from the U.S. Army’s Third Division traveled over the same paths they’d covered 50 years earlier in 1944 while struggling to take back territory seized by Hitler.

By witnessing the incredible obstacles our troops had to overcome firsthand, I instinctively understood that these men had gone through much more than the history books have reported. My husband usually chose to talk about only a few incidents that were, at times, hilariously funny, but I wanted to delve deeper. I talked to the veterans and chronicled their stories. I especially wanted to know more about the almost unbelievable events that still caused my husband and the rest of the men to grow teary-eyed so many years later.

As I learned the story of the war from a private’s perspective, I also came to understand the heartbreak of a mere boy who’d run away from a wretched home life to go off to war at 17. War is never an easy topic to grasp, but A KID FROM PITTSBURGH is sensitive yet out-spoken, rowdy, yet gentle. Brutal circumstances are made comprehensible. War is interpreted by a kid who grew up without even realizing it.

The Southern California Association of Book Publicists named A KID FROM PITTSBURGH "the most inspirational book of the year."


Comments about A KID FROM PITTSBURGH:

“Marion Rosen’s biography on husband, WWII hero Morris Rosen in her A KID FROM PITTSBURGH is a story that no Hollywood screenwriter could create. This is a must read for everyone.”
Roger Corman, Award winning filmmaker

“While Audie Murphy is perhaps the most renowned WWII hero it would be hard not to include Morris Rosen as someone high up on this list. Corporal Rosen was an amazing young man who performed miracles during WWII in putting his life on the line in the most dangerous situations imaginable.”
Edward Janke, Retired U.S. Army Colonel

"A KID FROM PITTSBURGH is a book I just couldn’t put down. Marion Rosen’s biography on her husband is a slam dunk."
Bob Cousy, Hall of Fame basketball legend

Following a diagnosis of cancer, shed your fear and get on with the extravagant pleasures derived from living life to its fullest. Does this sound implausible-- maybe even a bit crazy? Yet this strategy helped me to survive cancer, and it can help you or someone you care about to do the same.

Life does not go on forever for any of us, but it sometimes takes the sharp wake-up call of a cancer diagnosis to force the reality of this undeniable fact to sink in. How are you spending your gift of time on this earth? Do you understand just how beautiful and fragile life really is?

Read DANCE LIKE NOBODY'S WATCHING to learn how the mind-body connection, visualization, and many other "medicines" for the soul can work to alter the course of cancer. Turn your stress into strength; engage in activities that nourish your spirit. Embrace this philosophy and your fear of dying will simply melt away. And then when you kick up your heels and dance, you'll discover that you, too, can dance like nobody's watching.

I’m proud to say that my book was featured on the nationally syndicated Dr. Laura Show. Radio talk show host Dr. Laura Schlessinger selected my book as her featured book of the week, praising it as “a fascinating, important book that will fuel the reader’s passion for life.” She also said the reader will learn “that the most important thing in life is to actually live it.”

The book includes the delightful cover art drawn by granddaughter Natalie Rosen, who was seven years old at the time of publication. Natalie's mom, Ellen Rosen, helped Natalie to design the layout, making it perfect for this book. (My sincere thanks to both of them.)